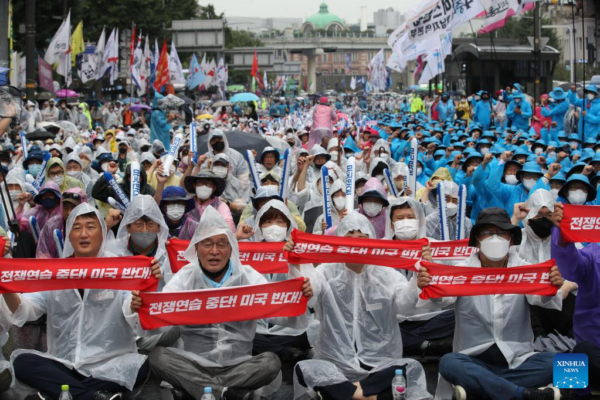 From October 31 to November 5, the U.S. and south Korea air forces carried out joint war exercises against north Korea called Operation Vigilant Storm. The joint exercises involved over 240 U.S. and south Korean aircraft and U.S. B-1B supersonic stealth bombers hovering near the DMZ. These provocations have prompted north Korea to respond with missile launches and excursions in the west sea border areas.

Tensions with north Korea have only increased since the inaugurations of the Biden and Yoon administrations. Biden and Yoon have taken a hard line against north Korea, and their administrations have led the largest joint military exercises in Korea since 2017. These U.S.-south Korea joint military exercises are pushing the peninsula and the region closer to open war, sparking fear across Korea and the Asia-Pacific. Thousands of people in south Korea are demanding the end of the U.S.-south Korea military alliance and a peaceful end to the Korean War. North Korea will not return to negotiations if the US and ROK continue to violate the UN Charter with their joint military exercises, including Foal Eagle/Key Resolve, Ulchi Freedom Shield, Hoguk, and Vigilant Storm.

Continued U.S. and south Korean military provocations against north Korea could lead to disastrous consequences for the people of the peninsula and the world. The Korean people have not forgotten the destruction and violence of the unfinished Korean War. The U.S.-south Korean military alliance poses an enormous risk to the safety and lives of the Korean people. If the Biden administration is truly serious about achieving peace in Korea, it must end U.S.-south Korea joint military exercises.

In the face of military escalation against north Korea, we must also prioritize people-to-people diplomacy. The travel ban put in place by the Trump administration in 2017 forced Nodutdol to halt our KEEP (Korea Education and Exposure Program) trips to the northern part of Korea. Since 2001, we have been taking diasporic Koreans back to our homeland to foster person-to-person engagement, build bridges, and witness the resilience of the Korean people in the face of imperialist aggression and capitalist crisis. Lifting the travel ban is critical to people-to-people diplomacy. Where the government has failed us over and over, we believe that people’s diplomacy through direct engagement can mobilize more Koreans toward peace and reunification.

Nodutdol supports the peaceful, independent reunification of Korea. We condemn the US’s failure to carry out its commitments made to peace in Korea in the Singapore Joint statement. The imperialist domination of the Korean peninsula – symbolized by the scar of division, divided families, violent sanctions, the presence of U.S. military bases in south Korea, and the ongoing war exercises – must end.

Let the people lead the way! Reunification in our lifetimes! End the Korean War! Toojeng!